The Trap of Anger 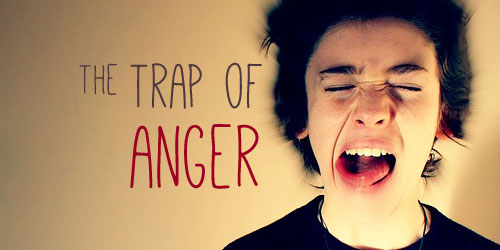 We’ve all done it! We’ve gotten angry. There are a lot of reasons to get angry. You may have not gotten a good grade on your math test and you’re angry at yourself for not studying more. You could be angry because you see someone at your school getting bullied, and you wish that people treated others with more respect. Or perhaps you’ve gotten angry because someone auditioned for the school play and got the part you knew you deserved. Anger can come to us from many different sources.

Anger in itself isn’t necessarily bad. Its your response to anger that can make or break you in life. For example, if you got angry that you didn’t get a good grade on your math test. And let’s say you used that anger to motivate you to study harder for the next test. That response to anger would be good. You channeled your anger into something productive, like studying harder for a test.

Sometimes though, your response to anger can be bad. If you allow your anger to consume you you can do things you regret. The story of Cain in Genesis four is a good example of this. Cain got angry with his brother Abel and that anger drove him to ultimately kill Abel.

The Lord asked Cain, “Why are you angry? Why does your face look sad? You know that if you do what is right, I will accept you. But if you don’t, sin is ready to attack you. That sin will want to control you, but you must control it.”
Cain said to his brother Abel, “Let’s go out to the field.” So they went to the field. Then Cain attacked his brother Abel and killed him. – Genesis 4:6-8 (ERV)

Cain made a bad decision out of anger. He chose to kill his brother Abel. Now, we know that killing someone is wrong, and most of us aren’t tempted to kill someone, but what do you do when someone gets something you feel is unfair? Do you talk about them behind their back? Give them the silent treatment? Or maybe try to get even with them?

Doing these types of things will not help you in the long run. It might make you feel better in the moment, but trying to get even or not treating someone nice isn’t the right way to respond to anger. When you get angry, you have a choice to make. Will you sin when you get angry and do something you may later regret, or will you channel that anger into something positive in your life. Ephesians 4:26 says it like this:

When you get angry, choose to not get even or hurt someone else. Choose instead to channel your anger into something positive.

Taking Responsibility For Your Actions

One Christmas Challenge You Won’t Regret Doing This Year

What a Thrown Away Apple Computer Can Teach Us About Value