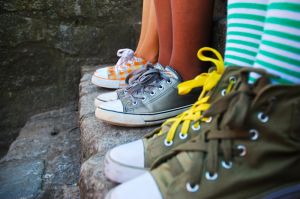 There are lots of different religions in our world today. I’ve seen estimates there are around 20 major religions and many other minor religions in the world. With all those religions out there, what makes Christianity awkward or different from all the rest?

The answer is simple. Many of the religions in our world are seeking to DO the right things. They believe if they DO enough good things and right things they will gain heaven, enlightenment, or some other sort of reward.

Christianity is different. Its awkward. Its not like the other religions because its not about DOING.

Christianity takes DOING and turns it on its head. Instead of having to DO the right things to gain heaven or a reward, Christianity focuses on what has already been DONE. In true Christianity, you can’t DO anything to earn heaven. True Christianity says its all about what has been DONE. Its simply accepting Jesus and believing that His death on the cross was enough to pay for all your sins. It switches from DOING something to earn a reward to what Jesus has DONE.

Salvation is not a reward for the good things we have done, so none of us can boast about it. – Ephesians 2:9 (NLT)

Christianity is awkward because its different. Unlike many of the other religions there is nothing you can DO to make yourself right with God. Its all about accepting what has been DONE. That’s hard to do. Its easier to feel like you should DO something to make yourself right with God. The truth is, its all about believing what God says over what you feel. That takes courage, and it can feel awkward at times.

Christianity is different because it is about what God DID. When we DO things its not to receive heaven or a reward, its in response to what God has already DONE. That’s what makes Christianity great!

Pray: God, I thank you that being a Christian isn’t about doing the right things, but its just simply believing and receiving what you’ve done by sending your son Jesus. I choose to live each day doing good things, not because I’m earning salvation, but because of what you’ve already done for me.