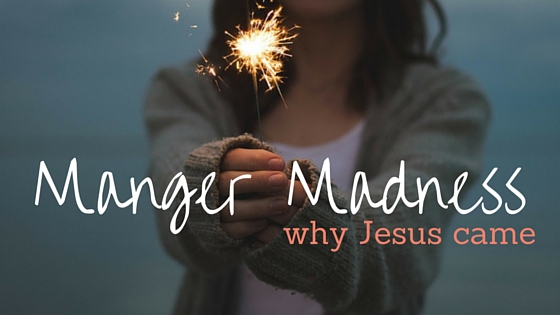 It’s the Christmas season, and everywhere you look, people are gearing up for Christmas. Yesterday, I walked into a store and saw they had a countdown of days left until Christmas. Christmas is a fun time of the year, between the gift giving, gift getting, fun lights and decorations, you’d have to be a real Scrooge to not enjoy Christmas.

You’ve probably seen all the decorations and the nativity scenes, but have you ever wondered, ‘Why Did Jesus Come?’. Why did Jesus come to earth. He had it going up in heaven, He was God’s son, and it really doesn’t get much better than that.  Did He come to earth because He wanted to practice His walking on water skills? Or was heaven getting really dull? Why was it that Jesus needed to come to earth as a baby?

Jesus had a problem to fix.

Each of us had a problem. We were stuck in our sin. We were trapped and slaves to sin. There was no amount of good works that could make us right with God. Simply put, we needed a savior.

For we know that our old self was crucified with Him in order that sin’s dominion over the body may be abolished, so that we may no longer be enslaved to sin – Romans 6:6 (HSCB)

Jesus did what we were unable to do by ourselves. We couldn’t make ourselves right with God. We were trapped, slaves to sin. Jesus paid the price that our sins deserved. He was a one time sacrifice, payment in full for our sins, shortcomings, mess-ups and failures.

Jesus gave us a new identity.

We used to be slaves to sin. Jesus changed that, and when He did, we were given a new identity. When we accept Jesus as our savior, we are considered right with God. We identify with Jesus now, not sin. We identify with victory, not defeat!

So now, it’s up to us to get our thinking lined up to what God’s word says about us. The Bible tells us that we’re a new creation.

This means that anyone who belongs to Christ has become a new person. The old life is gone; a new life has begun! – 2 Cor 5:17 (NLT)

We’ve been identified with Christ, but it’s up to us now to change how we see ourselves. We often look at our shortcomings and failures. We focus on those things, rather than focusing on how Jesus sees us. He sees us a new people. He doesn’t see our sins and shortcomings, rather He looks at us and sees a new identity. And now it’s up to us to live out that new identity.

Don’t let this just be another Christmas.

Don’t get so used to the Christmas lights, manger scenes and Santas everywhere that you forget what it all is really about. Jesus came to earth as a baby in a manger. But He didn’t just do it for kicks or because He was bored. He had a mission. He was going to bring mankind back into relationship with His father.

That’s the good news of Christmas. That we can know God the father and we’ve been made new because of what Jesus did!

What Traffic Lights Can Teach You About Getting To Heaven

Why Jesus Is Better Than The Easter Bunny – Part 2

How Donuts Help Us Live a Better Christian Life