Practical Tips To Deal With Disappointment

I was watching TV with friends one day, and the only thing on was Teen Titans. I don’t know if you’ve ever watched it, but I hadn’t before. It was pretty good, but the interesting thing was the teens in the episode had to defeat a monster. The interesting thing about the monster was that it kept getting bigger as the show progressed.

Finally, they realized they had to do something about the monster. Then all the characters banned together to fight and defeat the monster.

In life, we sometimes face monsters. No, they’re not literal cartoon monsters. Instead, they are areas in our lives that if we leave unchecked will grow really out of control. So let’s look at one of these monsters.

Disappointment was something that Jesus’ disciples faced.

We had hoped he was the Messiah who had come to rescue Israel. This all happened three days ago. – Luke 24:21 (NLT)

After Jesus died, the disciples had to deal with disappointment. They had thought that things would turn out differently than they did. They expected Jesus to free them from Roman rule. Instead, Jesus was dead. (They didn’t realize that He had already risen). At this moment, the disciples were understandably disappointed. They had expected one thing to happen and it didn’t.

You can probably relate to how the disciples felt. Maybe you were hoping to get your driver’s license, and since you can’t attend driver’s ed at school, you’re not sure that’s going to happen. And because of that, you’re dealing with a lot of disappointment.

So if you’re struggling with disappointment, don’t let go of your hope. Things will get better. Don’t be discouraged and don’t give up, God is not finished with you yet!

Daily Bible Verse and Devotion – December 4 (God is With Us) 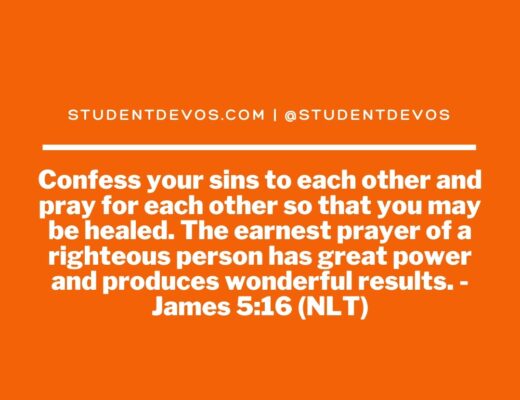