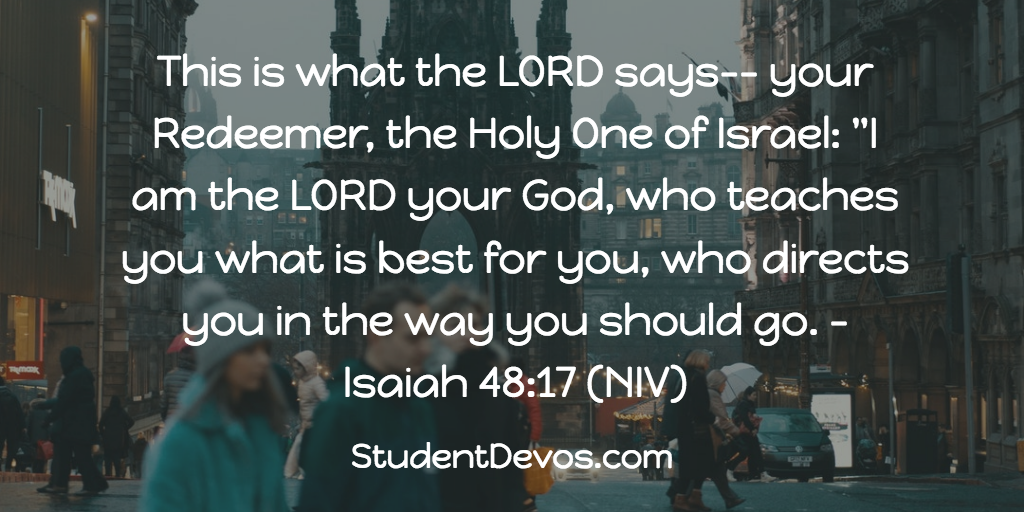 This is what the LORD says– your Redeemer, the Holy One of Israel: “I am the LORD your God, who teaches you what is best for you, who directs you in the way you should go. – Isaiah 48:17

Have you ever had to make a really difficult decision? I recall a time when I had to decide on which missions trip to go on one summer. It was really tough. I really wanted to go to China, but felt like for some reason God was encouraging me not to go. Instead, I picked the United Kingdom trip. I was disappointed because I really wanted to go to China, but decided instead to follow what I felt like was God’s leading. A few months later, I found out that all trips to China had gotten canceled that year. I was glad that I had followed God’s direction.

Life is full of difficult decisions. Many times it can feel overwhelming trying to make the right decision. If you’re faced with a tough decision right now, you can be encouraged. God wants to lead you. He wants to guide you and show you which way to go.

God wants to show you things to come and direct your paths. So go to Him. Ask Him for His leading and guidance and watch Him bring good things to pass in your life.